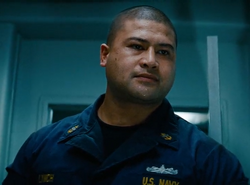 Chief Petty Officer "Beast" Lynch, a crew mate of the USS John Paul Jones. He serves under Lt. Alex Hopper. After the engagements with the aliens, he was awarded by Admiral Shane at the awarding ceremony. He had a personal encounter with the aliens in the engine room of the USS John Paul Jones shortly after Lt. Hopper took command in which he was nearly killed and would have been if not for the timely intervention of Lt. Hopper and PO Raikes who were searching the ship for the alien.

CPO Lynch survived the destruction of the John Paul Jones by the aliens, presumably rescuing Capt. Nagata and Lt. Hopper from the water before making it to the USS Missouri, where he began to give up hope of using the ship due to his lack of engineering knowledge for the aging vessel. Eventually, he assisted the Veteran Engineers of the Missouri in Lt. Hopper's last stand against the aliens to destroy the NASA Deep Space transmitter.

Retrieved from "https://battleship.fandom.com/wiki/%22Beast%22_Lynch?oldid=5043"
Community content is available under CC-BY-SA unless otherwise noted.