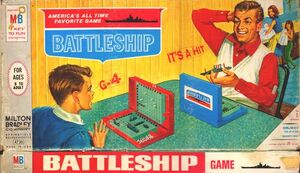 Battleship (also called Battleships and Sea Battle) is a two player guessing game. The game itself appears to predate at least World War I, but it's unknown just how far back people have been playing many different variations. It started off as a pencil and paper game until it was released by the Milton Bradley Company as physical board game in 1967. The game is now produced and sold by Hasbro.

The popular Battleship board game was inspiration for the 2012 film adaptation starring Liam Neeson. 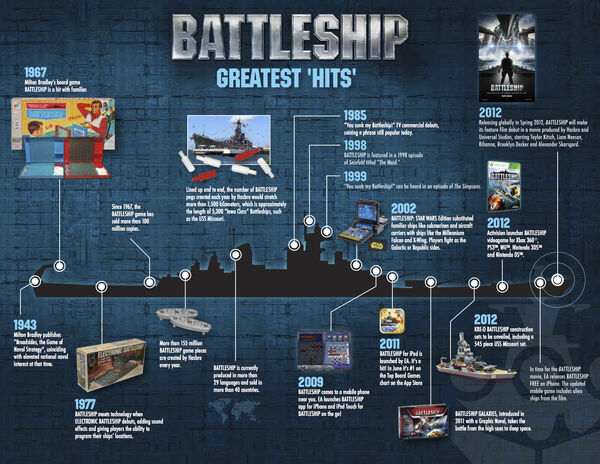 One game board with two grids, five ships, and a number of hit and miss markers.

Players receive a board with one grid, one of each type of ship, and a sufficient number of hit and miss markers.

Before play begins, each player must secretly arrange their ships on the lower grid.

In addition to "Salvo", another game variation is that if player gets a hit, the same player takes another turn. The player will keep calling consecutive shots until it misses, meaning the next player will call the next shot.

There are two typical complements of ships, as given in the Milton Bradley version of the rules:

(assumes the use of the printable grid sheet provided >)

A new and updated hexagonally tiled version of Battleship was released in 2010, in which each player's board contains several islands where "captured man" figurines can be placed. Ships may not be placed on islands, and may only reside on the player's own half of the board. 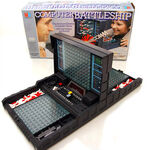 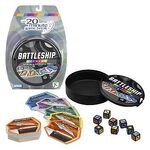 Pirates of the Caribbean Battleship 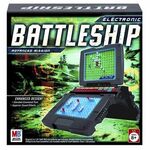 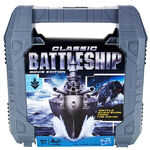 There also have been multiple versions of Battleship released on the PC, such as Battleship: Fleet Command.[3]== Hasbro's online site currently endorses a free version of Battleship through Pogo.com - available HERE.[4]

Battleship was also part of Hasbro Family Game Night for the PlayStation 2 and Wii, as well as the Xbox 360 via "Xbox Live Arcade." These versions alter the rules, and indeed the size of the grid (8×12 in the NES version, 8×8 in the Game Boy version). Additionally, the size of the ships have been changed (for instance, a submarine that occupies a single square) and various special shot missiles have been introduced for each ship.

In "Clubhouse Games" for the Nintendo DS, Battleship can be found under the title "Grid Attack" and is played on an 8×8 grid. This version features some slight variations, such as accommodating 4-player gameplay, more varied ship sizes and shapes, as well as an option to make the ships touch each other.

On April 20th, 2012, Battleship was released as a video game alongside the 2012 Battleship film.

In India, a slightly different version of Battleship is played. Instead of announcing whether a shot is a hit or miss immediately, the players are only required to announce how many of their opponent's three shots were hits, and on which kind of vessel(s). This provides more strategy in the game and moves away from players' dependence on pure luck. In this variation there is a new importance on keeping track of which turn a player scores a hit on something. The Indian version also uses a slightly different ship set:

In 2009 it was announced that there were plans for a feature film based on the game. Peter Berg is set to direct for Universal Studios, with the brother team of Jon and Erich Hoeber writing the script. A release date of August 5th, 2011 was originally set, but this was pushed back to May 25, 2012. The release date was later moved again to its current, commonly stated date of May 18, 2012, though some promotional posters vaguely read "SUMMER 2012."

Retrieved from "https://battleship.fandom.com/wiki/Battleship_(game)?oldid=5866"
Community content is available under CC-BY-SA unless otherwise noted.