Alongside the opening of the Battleship film in May 2012, Hasbro also released updated versions of the classic and electronic Battleship board games.

Official Description: Based on the debut BATTLESHIP motion picture coming soon, this movie themed version of the classic BATTLESHIP game brings to life all the excitement of the big screen. Sink your opponent’s fleet before he sinks yours in this heart-pounding, action-packed naval combat game. Choose to command the navy or the alien fleet, and defeat your enemy with new special ops cards that allow you to fire out complete columns of coordinates, fire as many shots as you have ships, or force your opponent to reveal un-hit coordinates. The classic “hit” or “miss” game comes in two folding hard cases that make it convenient to transport and store all of the pieces for easy play. 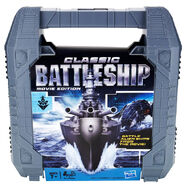 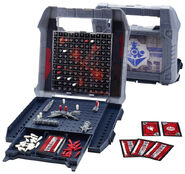 Official Description: Power up and choose a side with this electronic edition of the classic BATTLESHIP game. Features an all-new naval fleet and alien ships so you can recreate the battles from the upcoming BATTLESHIP motion picture by Universal Pictures. Light, Sounds, and Special weapons such as the American and Japanese Destroyers help players seek out and destroy their enemy’s ships. Send out jets for recon missions or even scan the water with the Aircraft Carriers before firing. The BATTLESHIP movie comes to life as players hunt down their enemy and take ‘em out in DELUXE BATTLESHIP Movie edition.

Retrieved from "https://battleship.fandom.com/wiki/Battleship_Movie_Edition_Games?oldid=5763"
Community content is available under CC-BY-SA unless otherwise noted.