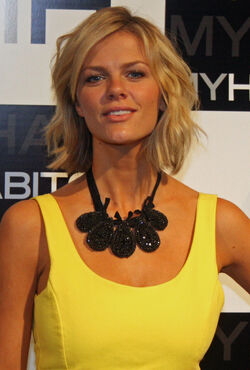 Brooklyn Danielle Decker, born April 12, 1987 (1987-04-12) (age 33) in Kettering, Ohio, is an American fashion model and actress best known for her photo shoots featured in Sports Illustrated's "Swimsuit Issue," including being featured on the cover of the 2010 issue. Decker also modeled for Victoria's Secret's 2010 "Swim" collection, and has ventured into television with guest appearances on Chuck, Ugly Betty and Royal Pains. She made her feature film debut in Just Go with It, and portrays Samantha Shane in the 2012 feature film Battleship - based on the iconic board game of the same name.

Retrieved from "https://battleship.fandom.com/wiki/Brooklyn_Decker?oldid=5496"
Community content is available under CC-BY-SA unless otherwise noted.