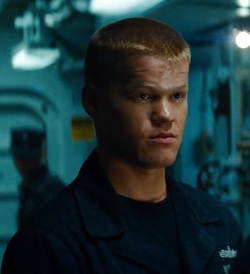 Jimmy Ord, usually known as Ordy, is a crew mate of the USS John Paul Jones. During the first confrontation with the aliens, Ordy panicked somewhat, informing Alex Hopper that he was now in command and asking for orders as he didn't know what to do. Ordy panicked worse at Hopper's orders to attack the alien vessels and then ram them and tried to make him see reason and go rescue surviviors from the Myoko which was sinking. He discovered that the aliens and lizards have the exact same eyes and their helmets are, basically, extreme sunglasses, which means that they can't handle the sunlight. This proves useful against the third alien ship where the crew use it against the aliens with Ordy driving the John Paul Jones, a job he seems to often do. When he did it this time, he drove the ship through shallow waters and a powerful current, showing that he is extremly good at it. When the USS John Paul Jones gets destroyed, he almost gets cut to pieces by a driller, but gets pushed to the side by Raikes in the last moment. When the crew takes the USS Missouri to continue the fight, Ordy helps an old sailor drive the ship and is at first nervous about it until the sailor yells at him to take his place. Afterwards, Ordy is awarded a medal by Admiral Shane for his actions.

Retrieved from "https://battleship.fandom.com/wiki/Jimmy_Ord?oldid=5821"
Community content is available under CC-BY-SA unless otherwise noted.