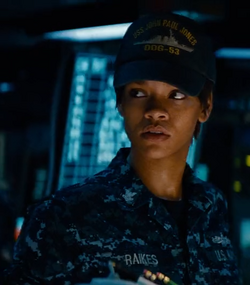 Petty Officer (GM2) Cora Raikes (portrayed by Rihanna) is a weapons specialist on board the USS John Paul Jones. Raikes serves under Lt. Alex Hopper, and is a capable gunner. During the engagements with the aliens, she helps Alex battle the alien that boarded the ship and kills it with the John Paul Jones front cannon after Alex lures it into position. During the attack using tsunami buoys to track the alien ships, she fires the missiles where directed and takes out two of the ships and is one of the ones that fires the John Paul Jones weapons once the last ship is blinded. She survives the destruction of the John Paul Jones and helps to crew the Missouri, working alongside the veterans in the control room and firing the cannons. At the end of the battle, after helping carry the last shell to the last working turret, on Alex's order, she fires on the NASA array, destroying it and the aliens that have taken it over. Raikes is later seen at the award ceremony, cheering Alex on as he gets his Silver Star.

"My dad said they'd come. He said it his whole life. He said we ain't alone. He said one day, either we'd find them, or they'd find us. Know what else he said? He said, "I hope I ain't around when that day comes."" - Petty Officer Cora 'Weps' Raikes

Add a photo to this gallery
Retrieved from "https://battleship.fandom.com/wiki/Raikes?oldid=5822"
Community content is available under CC-BY-SA unless otherwise noted.