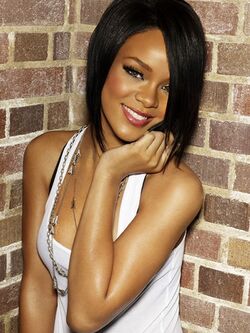 Rihanna, (born Robyn Rihanna Fenty February 20, 1988 (1988-02-20) (age 32)) in Saint Michael, Barbados, is a Barbadian singer, model, fashion designer and music director. While she has made numerous television appearances, she makes her film debut as a female sailor named Raikes in the 2012 feature film Battleship - based on the iconic board game of the same name. Rihanna is a five time Grammy Award winner, having been nominated eighteen times.

Rihanna came to fame in 2005 with the release of her debut album Music of the Sun, which featured her breakthrough single "Pon de Replay". Less than a year later, Rihanna released A Girl Like Me and gave her first number one single, "SOS". In 2007, Rihanna released her third studio album, Good Girl Gone Bad. The album has yielded six hit singles including three worldwide number one singles "Umbrella", "Don't Stop the Music", and "Take A Bow".

Retrieved from "https://battleship.fandom.com/wiki/Rihanna?oldid=5503"
Community content is available under CC-BY-SA unless otherwise noted.