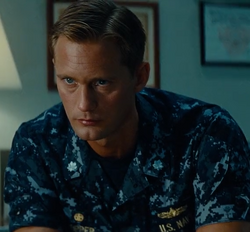 Name
Stone Hopper
Birthplace
Birthdate
Age
Relationships
Alex Hopper (brother)
Portrayed by
Alexander Skarsgård
Commander Stone Hopper is brother to Lieutenant Alex Hopper. Assigned as Captain of the Arleigh-Burke class destroyer, USS Sampson, he is a participant in the RIMPAC naval exercises serving under Admiral Shane. As well as dealing with the burden of command, Cmdr. Hopper is burdened with the repercussions of his brothers headstrong attitude and unacceptable behavior, especially after Lt. Hopper's altercation with Captain Yuri Nagata.

When the alien vessels first impact the planet, Cmdr. Hopper is dispatched alongside his brother's ship, the USS John Paul Jones and Captain Nagata's ship, the Myoko. After the discovery of a large object that could not be located on the instrumentation of each of the ships dispatched by Admiral Shane, Cmdr. Hopper requests that the John Paul Jones dispatch an away team to investigate. During the investigation of the object, by the away team from the John Paul Jones, a device is activated that projects a barrier releasing a sonic boom that smashes the windows of the assembled ships there. Regaining his feet and seeing that Lt. Hopper, CPO Lynch and PO Raikes are in trouble, he orders the Sampson to open fire. The enemy returns fire, landing a shot on the Bow of the Sampson and causing a large explosion the opens a breach in the Sampson's hull. Continuing to fire, the Sampson is overwhelmed by enemy fire and destroyed, killing Commander Hopper and his entire crew.

"What the hell is this?"-Stone's response to the alien sonic shockwave that neutralises the crews of the ships.

"Who do I call to teach you humility?!"-Stone after informing Alex of his discharge from the navy at the end of RIMPAC.

Erika Bierman (born June 14, 2001) is an American actress who played as the 13 year old Penny Pinchelow in a daydream by Harry Dunne in Dumb and Dumber To. Her Brother Thomas Bierman plays for Kingfisher Oklahoma as a Tight End along with Thom

Add a photo to this gallery
Retrieved from "https://battleship.fandom.com/wiki/Stone_Hopper?oldid=5886"
Community content is available under CC-BY-SA unless otherwise noted.