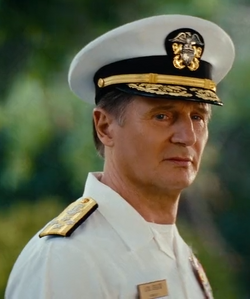 Admiral Terrance Shane (portrayed by Liam Neeson) is an Admiral in the United States Navy. He is the father of Samantha Shane (Brooklyn Decker), and the direct superior of both Alex Hopper (Taylor Kitsch) and Stone Hopper (Alexander Skarsgård). The Admiral recognizes Alex's potential, but also feels his reckless behavior is holding him back. He is aware that the Lieutenant and his daughter are dating, but not that they are in fact engaged. When the aliens arrive during RIMPAC, he dispatches destroyers USS Sampson, USS John Paul Jones and the Japanese destroyer Myoko to investigate, but is cut off when a barrier is erected. After a fighter jet trying to get through is destroyed, he refuses to send anymore and decides to rely on his men inside while readying his ships and fighters for if the barrier goes down. When the barrier suddenly does go down because of the USS Missouri destroying it, Admiral Shane quickly orders the launch of all of his aircraft carrier's fighters and they arrive just in time to save the defensless battleship from the alien force field ship and to destroy that ship. Afterwards, Admiral Shane awards the heroes of the battle awards including now Lieutenant Commander Alex Hopper a Silver Star and tells Alex he looks forward to when Alex gets his own ship to command. After the ceremony, Alex, prompted by Samantha, asks him for permision to marry his daughter which he instantly denies. However, Admiral Shane invites Alex for a chicken burrito (causing Alex to realize Samantha told him about how she and Alex met) to discuss Alex's "surrender."

"What my daughter sees in you is a great mystery to me."-Shane speaking to Alex shortly after Alex's fight with Nagata.

"Want me to send up another plane? I'll do it the second you come up here and put your ass in the pilots seat, sir!"-Shane's furious response to the Minister of Defences order to send aircraft into the barrier.

Add a photo to this gallery
Retrieved from "https://battleship.fandom.com/wiki/Terrance_Shane?oldid=5849"
Community content is available under CC-BY-SA unless otherwise noted.