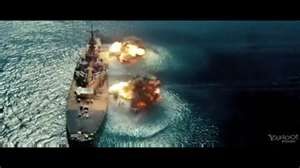 USS Missouri (BB-63) is one of four of the remaining Iowa-class Battleships. The Missouri was commissioned during World War II and ended the war in 1945 with the Japanese surrender on her deck that ended the war.

Much of the technology on the Missouri is much older compared to the US Navy's modern day ships. Her main armament consisted of Nine 16 inch (406 mm)/50 Cal Mark 7 large guns mounted in three turrets. They pack a huge punch and they are controlled mechanically and electronically from the two gun directors. The battleships main guns can all be fired at the same target if the ship had its full broadside facing it. She had a secondary armament of 20 smaller 5 inch (127 mm)/38 Cal Mark 12 Guns in turrets all positioned in the mid section and 80 (40 mm)/56 Cal anti-aircraft guns and 49 (20 mm)/70 Cal anti-aircraft cannons for defense against small boats and aircraft. She also possessed two Phalanx CIWS turrets for defense against guided missiles. The Missouri's weapon systems didn't rely on digital technology to lock on targets unlike the guided missiles on the Arleigh Burke-Class destroyers which proved useful during the Regent Invasion as the aliens had rendered much of the radar guided technology useless.

In 1984 she was brought out of mothballs and refitted with new modern technology.  During the refit and modernizing, the USS Missouri had her obsolete armament removed: 20 mm and 40 mm anti-aircraft guns, and four of her 5-inch (130 mm) gun mounts. In their place were installed 32 armored Tomahawk Anti-Surface or Land Attack missiles in 8 armored box launchers; Sixteen Harpoon anti-surface missiles in 4 quad cell launchers; four 20 mm Phalanx CIWS Gatling type guns capable of firing 20 mm ammunition at a rate of 50 rounds per second (3000 rounds per minute) for self-defense against missiles and aircraft.  Also included in her modernization were upgrades to radar and fire control systems for her guns and missiles. Installed were: AN/SPS-49 Air Search Radar, AN/SPS-67 Surface Search Radar, AN/SPQ-9 Surface Search / Gun Fire Control Radar As well as improved electronic warfare capabilities: AN/SLQ-32 which provided a passive targeting capability for Harpoon missile and active radar-jamming.  For added defence against enemy missle 8 Mark 36 SRBOC Super Rapid Bloom Rocket Launchers that launches chaff or infrared decoys to foil anti-ship missiles were added.

At the beginning of the final battle, the USS Missouri used a tactic called "Salvo". A military tactic used both Army and Navy, which all of the guns are fired simultaneously to cripple the enemy as soon a possible and to prevent them from fight back.

After John Paul Jones was destroyed, Alex, along with the other survivors, returned to Pearl Harbor using RHIB's.

Alex then decided to use it because it was the only available ship. At first, Lynch argued that the ship was old, decommissioned and he also argued that they don't have enough crew to use it. Fortunately the old war veterans that were preserving the Missouri helped Alex and his crew reactivate the ship. The battleship sails towards the island of Hawaii where it duels the alien flagship (the last alien vessel and the one carrying the forcefield generator). Thanks to Alex's quick thinking the Missouri dodges the first shots fired by the flagship, drifts on the water, is brought to a skidding stop and the battleship's big guns bring heavy damage to the alien vessel. Missouri however takes a hit to the stern knocking out her rear turret. Missouri continues firing spending all but the last shell though the crew manage to cripple the alien ship and destroy its forcefield generator. Alex prepares to use the last shell to destroy the communications array on Hawaii to prevent the aliens signalling there homeworld. The last shell destroys the target but Missouri is left defenseless as a launcher recovers on the crippled flagship which launches three shredder drones to attack the battleship. Luckily, jet fighters from the RIMPAC fleet (which had been scrambled by Admiral Shane after the forcefield was brought down) arrive and destroy the drones and the flagship.

Community content is available under CC-BY-SA unless otherwise noted.
Advertisement